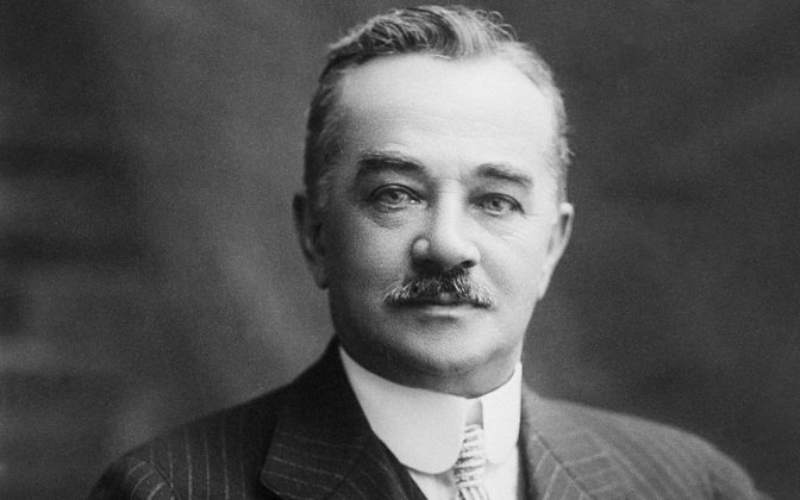 Milton Snavely Hershey was a successful entrepreneur and philanthropist born in 1857. He was the founder of the Hershey Chocolate Company. In addition, Hershey was a great humanitarian and pioneered many new ideas in the food industry.

The Early Life of Milton Hershey

Milton Hershey was born on September 13th, 1857, near Derry Church, Pennsylvania. In fact, he is of French and German descent. Milton’s parents could not read or write, but his grandfather was a well-educated man. So Hershey’s learned to read and write from his grandfather.

Milton Hershey attended the academy of the Reverend Samuel H. Cross in Derry Church, Pennsylvania, from 1867-1872. He was a good student and excelled in reading and writing. He also enjoyed being a part of the singing and theater groups. Milton Hershey was brilliant and ambitious, despite his meager beginnings.

His family struggled with poverty, and he had to quit school when he was just 15 years old to help out his family. Therefore, he has to work in a candy shop in Lancaster, Pennsylvania.

Milton was an inventive and creative person and he had a knack for business. He started by making caramels and candy apples in his mother’s kitchen. Then, he would sell them to neighbors and friends in Lancaster, Pennsylvania.

Milton Hershey began his career in the chocolate business in 1857 when he was just 21 years old. Joseph Royer hired him to help in Royer’s Lancaster Caramels Company at the former mill of David Heth’s in Pennsylvania. Royer’s company was well-established and had many skilled employees, but Royer had seen Hershey’s skill in making caramels. Hershey soon became the leading caramel maker in town.

Milton borrowed a loan from a bank. He began the Lancaster Caramel Company. Soon, the business boomed beyond his expectations. Learning from past experiences, Milton Hersheys found out that caramel is a best seller. He learned that it sold in bulk and decided to take up the opportunity gap.

One day, a man visited Lancaster. He traveled from England. The man was impressed by the candies. Later, he placed a huge order on the candies and requested them to be delivered to Britain. Through this order, Milton Hershey was able to pay off the debt. He invested in expanding the business further. Hershey bought more equipment and ingredients.

In 1890, the Lancaster Caramel Company immensely grew. The company has 1300 employees working in over two factories.

Later in 1890, Milton Hershey decided to visit the World’s Columbian Exposition that took place in Chicago. As a result, an interest in chocolates grew. Hershey decided to take a risk, and he sold the Lancaster Caramel Company for approximately USD 1 million dollars. The Hershey Chocolate company then began. In 1898, Milton Hershey married Catherine Sweeney. Milton met Catherine at a candy shop in New York while delivering one of his caramel orders.

The Hershey Chocolate Company – The Beginning

Milton purchased 30-mile farmland at the Northwest of Lancaster. He decided to locate the Hershey Chocolate Company at Derry Township – his birthplace. Not only did this connect him with his birthplace, but he also obtained massive supplies of fresh milk. The milk was perfected to produce fine milk chocolate. Since the milk had a lot of potentials, Hershey decided to make his brand luxurious.

He developed a milk formula to make chocolates targeting the American public. In 1900, the first-ever Hershey Bar was produced. Later in 1907, Milton innovated the famous Hershey’s Kisses. Finally, Hershey’s Bar with almonds was brought in 1908.

The Growth of Hershey’s Chocolate Company

Milton began the construction of the world’s greatest and largest chocolate manufacturing company on March 2nd, 1903. By 1905, the construction was fully completed. The factory used the latest mass production techniques to meet demand. Soon, Hershey’s milk chocolate grew and became the first nationally marketed product of its kind.

In fact, Hershey’s factory was locator in the middle of dairy farmland. It granted access to milk but transportation was a bit of a problem. However, his family and the nearby community assisted him.

By 1909, Milton and Sweeney founded the Hershey Industrial School. Milton and Sweeney decided to care for other children as they could not have their own. They provided education and opportunity for orphaned boys in the community. Unfortunately, in 1918 Sweeney passed away. Therefore, Milton gifted the Hershey Trust School with his entire fortune.

Later on, in 1935 Hershey founded the M.S Hershey Foundation. The foundation provided workers and residents in the community with cultural opportunities.

As a matter of fact, during World War II, Hershey supplied the United States Army with chocolate bars. He called them the ‘Tropical Chocolate Bars’ and “Ration D Bars’. The chocolates were rather special as they had to meet the army leather change and requirements; for example, they had to resist melting. Therefore, Milton decided to make bars that weighed 28 grams to 57 grams (around 1 to 2 ounces). By 1939, the company produced at least 100,000 Ration D bars per day. Around 3 million bars were sold between 1940 to 1945. The Hershey plant grew tremendously. It produced 24 million Ration D bars every week.

On October 13th, 1945, Hershey’s died of pneumonia at the age of 88. Because of his legacy, September 13th (his birthday) is named ‘International Chocolate Day. Moreover so, at the Hershey School, a bronze statue of Hershey wrapping an orphan boy in his arms is placed. Below the statue, they have inscribed the words, “His deeds are his monument. His life is our inspiration.”

Read more on: Cher Wang – Story Of An Inspirational Entrepreneur

In this article:Billionaire, Entrepreneur, entrepreneurship, success