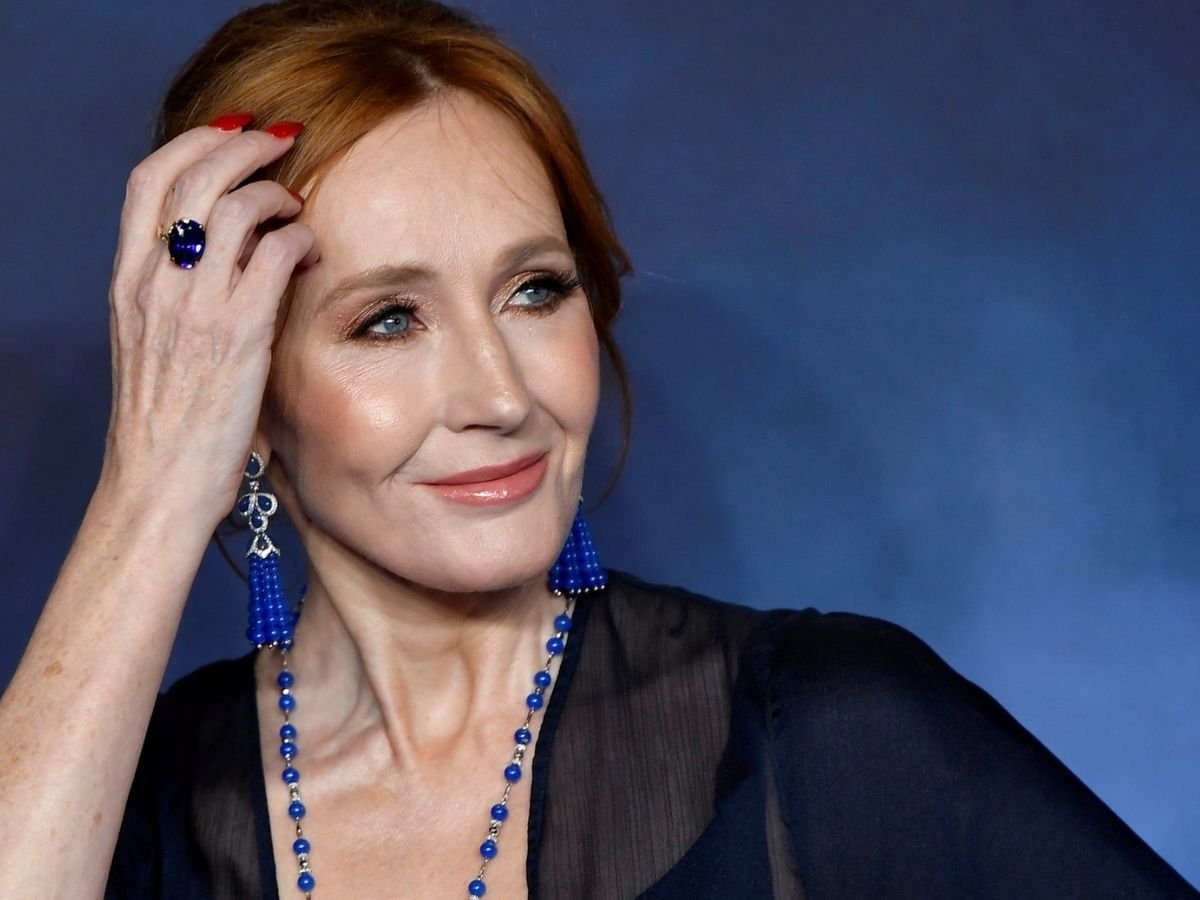 Famously known as J.K Rowling, Joanne Rowling is known for her amazing book and series of Harry Potter. J.K Rowling is her pen name. She chose the name as her publishers asked that she use two initials rather than her full name, anticipating the possibility of the target audience of young boys not wanting to read a book written by a woman.

As she had no middle name, she chose K (for Kathleen) as the second initial of her pen name, from her paternal grandmother. In fact, she calls herself Jo.

Joanne Rowling was born on 31 July 1965 in Yate, Gloucestershire, to Anne (née Volant), a science technician, and Peter James Rowling, a Rolls-Royce aircraft engineer. J.K. Rowling’s parents met on a train from King’s Cross Station in 1964. After Rowling used King’s Cross as a gateway into the Wizarding World it became a popular tourist spot.

Rowling’s sister Diannewas born at their home when Rowling was 23 months old. The family moved to the nearby village of Winterbourne when Rowling was four. In addition to that, as a child, Rowling often wrote fantasy stories which she frequently read to her sister.

When Rowling turned nine, she moved Rowling moved to Church Cottage in the Gloucestershire village of Tutshill, close to Chepstow, Wales. Her great aunt gave her a copy of Jessica Mitford’s autobiography called Hons and Rebels when he was nine years old. Soon, Mitford became Rowling’s heroine, and Rowling read all of her books.

According to Rowling, her teenage years were unhappy. Her home life was complicated by her mother’s diagnosis of multiple sclerosis and a strained relationship with her father, with whom she is not on speaking terms. As a matter of fact, H.K Rowling stated that she based the character of Hermione Granger in the Harry Potter series on herself when she was just eleven years old. Her best friend Sean Harris owned a turquoise Ford Anglia which she was inspired from: that is how she recreated a flying version of it which appeared in Harry Potter and the Chamber of Secrets.

Just like many teenagers, she became interested in rock music, listening to the Clash, the Smiths, and Siouxsie Sioux, adopting the look of the latter with back-combed hair and black eyeliner, a look that she still sported when beginning university.

J. Rowling attended secondary school at Wyedean School and College. Her mother worked in the science department. She was studious in school. She took English, French, and German, in A-Levels and she was the head girl at school.

After her secondary school, J.K Rowling earned a BA in French and Classics at the University of Exeter. Martin Sorrell, a French professor at Exeter, remembers “a quietly competent student, with a denim jacket and dark hair, who, in academic terms, gave the appearance of doing what was necessary.” Rowling recalls doing little work, preferring to read Dickens and Tolkien.

In 1986, Rowling graduated from Exeter after a year of study in Paris. In 1988, Rowling wrote a short essay about her time studying Classics titled “What was the Name of that Nymph Again? or Greek and Roman Studies Recalled,” it was published by the University of Exeter’s journal Pegasus.

Later on, J.K Rowling worked as a researcher and bilingual secretary in London for Amnesty International. Then she moved with her boyfriend to Manchester. She worked at the Chamber of Commerce. In 1990, she was on a four-hour delayed train trip from Manchester to London when the idea “came fully formed” into her mind for a story of a young boy attending a school of wizardry. When she reached her Clapham Junction flat, she began to write immediately.

J.K Rowling’s mother Anne passed away 10 years after suffering from multiple sclerosis. Her mother’s death heavily affected Rowling’s writing, and she channeled her own feelings of loss by writing about Harry’s grief in greater detail in the first book.

Rowling moved to Porto to teach English as a foreign language. In 1993, she returned to the UK accompanied by her daughter and three completed chapters of Harry Potter after her marriage had deteriorated. She taught at night and began writing in the day while listening to Tchaikovsky’s Violin Concerto.

The beginning of Harry Potter

Harry Potter and the Philosopher’s Stone was finished in 1995. Reader, Bryony Evens gave an enthusiastic response. He had been asked to review the book’s first three chapters. Later on, the Fulham-based Christopher Little Literary Agency agreed to represent Rowling in her quest for a publisher.

As a matter of fact, the book was submitted to twelve publishing houses, all of which rejected the manuscript. A year later, she was finally given the green light (and a £1,500 advance) by editor Barry Cunningham from Bloomsbury, a publishing house in London.

The decision to publish Rowling’s book owes much to Alice Newton, the eight-year-old daughter of Bloomsbury’s chairman, who was given the first chapter to review by her father and immediately demanded the next. Although Bloomsbury agreed to publish the book, Cunningham says that he advised Rowling to get a day job, since she had little chance of making money in children’s books. Soon after, in 1997, Rowling received an £8,000 grant from the Scottish Arts Council to enable her to continue writing.

The success journey of the Harry Potter series

Bloomsbury published Philosopher’s Stone with an initial print run of 1,000 copies, 500 of which were distributed to libraries in June 1997.

At this point in time, these books value almost between £16,000 and £25,000. The book won its first award five months later;  the Nestlé Smarties Book Prize.

In February 1998, the novel won the British Book Award for Children’s Book of the Year. Later on, the Children’s Book Award. In early 1998, an auction was held in the United States for the rights to publish the novel and was won by Scholastic Inc., for US$105,000.

In fact, Rowling said that she “nearly died” when she heard the news.  In October 1998, Scholastic published Philosopher’s Stone in the US under the title of Harry Potter and the Sorcerer’s Stone, a change Rowling says she now regrets and would have fought if she had been in a better position at the time. By the time, J.K Rowling moved from her flat with the money from the Scholastic sale, into 19 Hazel bank Terrace in Edinburgh.

She later withdrew the fourth Harry Potter novel from contention to allow other books a fair chance. In January 2000, Prisoner of Azkaban won the inaugural Whitbread Children’s Book of the Year award, though it lost the Book of the Year prize to Seamus Heaney’s.

Harry Potter and the Goblet of Fire, the fourth book was released simultaneously in the UK and the US on 8 July 2000 and broke sales records in both countries, with 372,775 copies of the book sold in its first day in the UK, almost equaling the number Prisoner of Azkaban sold during its first year.

To add on, the book sold three million copies in the US in its first 48 hours, smashing all records. Rowling stated that she had a crisis while writing the novel and had to rewrite one chapter many times to fix a problem with the plot. Furthermore, Rowling was named Author of the Year in the 2000 British Book Awards.

Fans waited for three years and Goblet of Fire and the fifth Harry Potter novel, Harry Potter and the Order of the Phoenix was released. This gap led to press speculation that Rowling had developed writer’s block. However, she denied these speculations later. Rowling later said that writing the book was a chore, that it could have been shorter, and that she ran out of time and energy as she tried to finish it.

The sixth book, Harry Potter and the Half-Blood Prince was released on 16 July 2005. It is no surprise that it broke all sales records. It sold nine million copies in its first 24 hours of release.  In 2006, Half-Blood Prince received the Book of the Year prize at the British Book Awards.

On 21 December 2006 The title of the seventh and final Harry Potter book was announced as Harry Potter and the Deathly Hallows. In February 2007, it was reported that Rowling wrote on a bust in her hotel room at the Balmoral Hotel in Edinburgh that she had finished the seventh book in that room on 11 January 2007.

As a matter of fact, Harry Potter is now a global brand worth an estimated US$15 billion, and the last four Harry Potter books have consecutively set records as the fastest-selling books in history. The series, totaling 4,195 pages, has been translated, in whole or in part, into 65 languages.