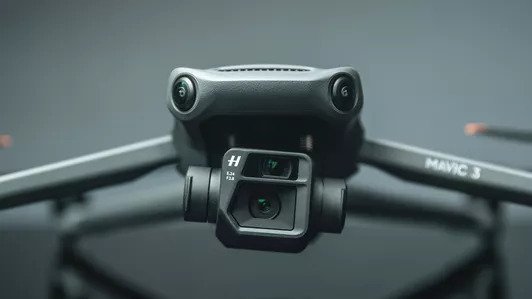 DJI's latest Mavic 3 drone packs a whole suite of upgrades over its predecessor to make it even more appealing to aerial photographer and videographers./Andrew Hoyle/CNET

DJI’s latest Mavic 3 drone packs a whole suite of upgrades over its predecessor to make it even more appealing to aerial photographers and videographers. With video capture up to 5.1K resolution, the new Mavic 3 packs two cameras for switching between different zoom levels, upgraded flight time to an impressive 46 minutes, and a variety of smart, automated flight modes.

The camera is a big deal here. Instead of one lens, it now has two, and, as with its predecessor, they’ve been built in partnership with high-end camera manufacturer Hasselblad. In addition, its main camera has a fixed 24mm wide-angle view and packs a 20-megapixel 4/3-size image sensor. That’s physically larger than the previous model’s which in theory should allow the camera to capture more light and achieve better dynamic range.

Indeed, DJI promises improved low light performance and up to 12.8 stops of dynamic range, allowing for more detail in shadowy areas and more control over those bright skies. It has a manually adjustable aperture from f2.8 through to f11, and it’ll shoot video at up to 5.1K resolution at 50 frames per second, or up to 120fps at 4K for some silky slow-motion action.

Then there’s the second camera, which provides a huge zoom level that’s the equivalent of a 162mm telephoto lens. That’ll be great for isolating your subject in the environment and providing more of a cinematic telephoto look when circling them. The zoom has a smaller image sensor, a 12-megapixel still resolution, a 4K video resolution, and a fixed f4.4 aperture so that it won’t be as good in low-light conditions. Still, I’m excited to see what this is like in brighter scenarios.

DJI is also launching the Mavic 3 Cine version, which uses the same camera hardware but can record in Apple ProRes format, which gives much more scope for processing in software like Adobe Premiere, Final Cut Pro, or DaVinci Resolve. It also features a built-in 1TB SSD for storing the huge files it’ll generate and comes with a higher price of $4,999 (£4,279), which includes extra batteries and a case.

Speaking of batteries, all Mavic 3 models use the new higher-density batteries, which DJI reckons will achieve up to 46 minutes of flight time from a single charge, which is among the best flight time offered by any consumer drone right now and a big step up from the 30 minutes the Mavic 2 Pro could manage. How well it fares remains to be seen when I take it for a full test.

The Mavic 3 also offers video transmission from the drone up to 15km (9.3 miles) away, although only fly within distances allowed by your local laws. In addition, there are upgraded sensors on all sides to allow it to safely avoid crashing into anything and various object-tracking flight modes designed to help you get cinematic footage with minimal effort on your part.

Overall, it sounds like an incredibly impressive package that will help enthusiastic photographers and professionals get great imagery from the air. Admittedly, it’s a hefty price hike over its predecessor, but with such significant upgrades across the board, it seems like DJI has done a lot to justify the extra cost.

In this article:DJI, Drone, Latest, News US, Tech, update, Version