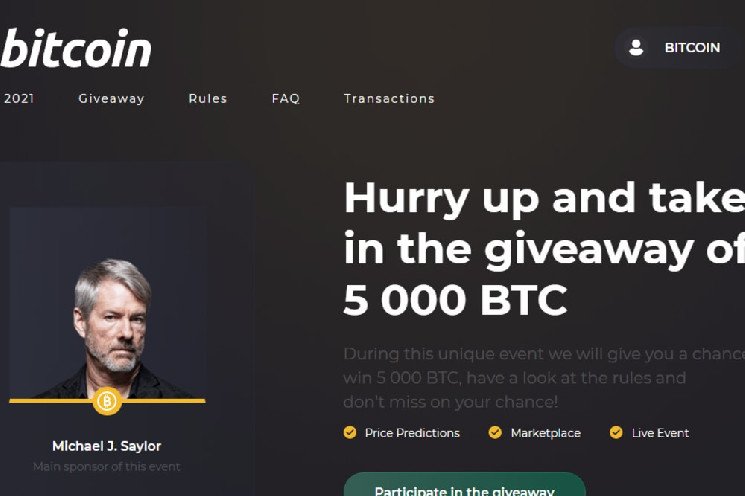 A new giveaway scam has just launched and is luring a few unsuspecting victims, so we urge our readers to be cautious and not fall for it.

New Ways to lose your Crypto to Scammers

It’s the website https://bitcoin22.io/ this time. and, according to the website, by participating in the giveaway, each Bitcoin hodler has a chance to receive an additional amount of Bitcoin.

To add credibility, the site includes a portrait of Microstrategy CEO Michael Saylor as well as the brand emblem.

The figure of Microstrategy’s CEO was used in a Bitcoin scam in November 2021.

In a gifting scam, an impersonator of Michael Saylor stole more than $4 million from victims. The format of that scam appeared to be similar, and the tagline was similar as well: “Hurry up and participate in the 5000 BTC giveaway.” However, the amount promised is the only difference.

Scam Has a Long History

Despite the fact that Bitcoin’s global adoption has risen in recent years, there are still many obstacles in the way of widespread adoption.

Unlike traditional money transactions, which must go through a mediator and incur a variety of service fees, Bitcoin transactions can be made directly between participants at no cost.

Due to the unusual behavior, civil, commercial, and criminal lawsuits have been filed alleging fraud and the misappropriation of millions of dollars in real money.

Scammers frequently impersonate celebrities, such as Michael Saylor, and then ask for bitcoins to be sent to a specific address. Then, they offer to quadruple the amount of cryptocurrency that investors deposit as a way to gain trust.

Saylor, the CEO of MicroStrategy, is a big supporter of cryptocurrencies.

Since August, MicroStrategy has purchased up to 114,042 BTC, making it the company with the largest Bitcoin holdings of any publicly-traded company. The holdings are worth more than $6.57 billion at current market prices.

According to the US Federal Trade Commission, cyber thieves stole more than $2 million in fake Musk gifts around May 2021. (FTC).

The hacking of the Indian Prime Minister’s Twitter account, which took place on December 12 of last year, is particularly noteworthy.

Hackers hacked Prime Minister Narendra Modi’s Twitter account, claiming that India had purchased a large amount of bitcoin and distributed it to citizens. Hackers attached a bogus link to the message.

Prime Minister Narendra Modi is the most popular incumbent politician on Twitter, with over 73 million followers. So his announcement on Twitter drew a lot of attention and was quickly deleted.

The incident occurred on December 12th, as India prepares to stifle burgeoning cryptocurrency trading with a new law set to be introduced in parliament later this month.

Prime Minister Narendra Modi’s social media account has been hacked for the second time. His other Twitter account was also hacked last year, and a tweet was sent out urging people to donate to a fake Covid-19 relief fund.

Cryptocurrency fraud has increased dramatically in recent years. However, as fraud cases are frequently linked to the rapid rise in digital asset prices, the company appears to have succumbed to its success.